What a surprise!  I must be wearing ruby slippers! 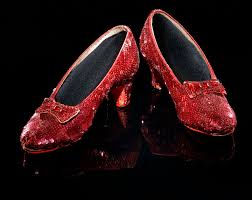 Stephen and I were at a new favorite hole in the wall restaurant as September 8th was our 34th anniversary. Stephen had already given me a fun card. Then out of nowhere he slipped me a wee box, not wrapped. Happy Anniversary!

I could say that Stephen and I have been married 5 times. 5 rounds of 7. Each cycle just long enough to get fed up with something about me, him, and us. Fortunately, we have lots of desire to be together. On our 33rd anniversary we rededicated our marriage,  choosing to finally say the words we were scared to say int the beginning, “Til death do us part.”

Stephen handed me the box.

In it was a ruby that Stephen had set into a necklace. It had no chain. (love that) I had no idea or even desire for a ruby or any gift of this nature. It came out of the blue as a sign of his love.

Later that night we bought a silver chain and now I am wearing it.

What is a ruby? Turns out it’s one of the four hardest and most valuable gems. It has been worn throughout the ages for many reasons.

What strikes me in my research….

A powerful symbol of the sun, Ruby is believed to contain the bloodline of humanity. Its glowing radiance suggests an inextinguishable flame within the stone that cannot be hidden, as it would shine through clothing or any material wrapped around the gem. An exaggerated Eastern legend says according to the Talmud, Abraham, when keeping his numerous wives held in an iron city, in order to give them light, set a bowl of Rubies in its midst which filled all the air with luster. [Mella, 103][Kunz, 101][Fernie, 139, 142]

Throughout history Rubies have been considered perfect wedding stones. Their association with love, marriage, balance and royalty has held fast throughout time. Ancient Egyptians honored Ruby for beauty and love, protection and good fortune, and Eastern cultures considered Ruby a spiritual stone representing the beauty of the soul.

Of course Ruby could give me more ooomph than I need. On the other hand like medicines I have taken I could allow this elemental to work on my behalf. Anything I can do to let go is always good for me.

Let me tell you why I am sharing this. I invited feedback on my Ensoulment course and one question is about the name. I love the ensoulment idea as the balance to embodiment. However, when i stopped to ask my higher power, LOVE, about the name, I touched the pendant. Ruby.

When I looked up Ruby the first thing I found is that it is the name of a tech thing.

Ruby is a dynamic, reflective, general-purposeobject-oriented programming language… first designed and developed in the mid-1990s by Yukihiro “Matz” Matsumoto in Japan

I love tech mystic connections even though I know so little about this world. But look at those words. The technologies I want to offer are also part of a dynamic, reflective, general-purposeobject-oriented programming language.

As my new favorite saying goes  MORE SHALL BE REVEALED!