I love Tu B’Shvat, The Blessing of the Trees, especially since the Tree of Life stands at the center of both Judaic, Christ centered and my own mysticism.  Hear these powerful words 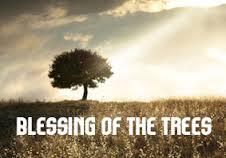 Rabbi Simeon says, “Mark this well. Fire, air, earth and water are the sources and roots of all things above and below, and all things above, below, are grounded in them.’” (Zohar, Exodus 23b)

“If you hush’sh’sh’sh to listen, really listen, to the teachings of YHWH/ Yahhhh, the Interbreath of Life, especially the teaching that there is Unity in the world and inter-connection among all its parts,  then the rains will fall as they should, the rivers will run, the heavens will smile, and the good earth will fruitfully feed you. BUT if you chop the world up into parts and choose one or a few to worship – like gods of wealth and power, greed, the addiction to Do and Make and Produce without pausing to Be and make Shabbat — then the rain won’t fall  – or it will turn to acid; the rivers won’t run  – or they will flood your cities because you have left no earth where the rain can soak in;  and the heavens themselves will become your enemy: the ozone layer will cease shielding you, the Carbon Dioxide you pour into the air will scorch your planet. And then you will perish from the good earth that the Breath of Life gives you.”

“Master of the Universe, Grant me the ability to be alone; May it be my custom to go outdoors each day among the trees and grasses, among all growing things and there may I be alone, and enter into prayer to talk with the one that I belong to.” (Reb Nachman of Bratzlav)

“Jewish mysticism imagines the cosmos to be a manifestation of the divine which unfolds through ten powers or qualities, which are called the sefirot. The sefirot …are seen as both emanated and eternal, created and pre-existent; as such, the sefirot become the pattern both for God and creation. The world of the sefirot is typically pictured in terms of two forms: a cosmic tree and a primordial human body.

“The central sefirot  are described both as the trunk of a body and the trunk of a tree. It is this tree which we celebrate on Tu B’Shvat, the “New Year for The Tree,” as Kabbalists understood the mishnaic phrase “rosh ha-shanah la-ilan”. The way in which these forms overlap has three obvious implications: 1) the human is patterned in the image of both creation and God simultaneously, 2) creation in its totality is therefore also “in God’s image,” and 3) the tree itself is also created in the image of God.”

“The unity of human and tree which is the basis of the Kabbalistic Tu B’Shvat seder is not just a metaphor for how important trees are to us, but a meditation on the idea that both trees and human creatures are patterned after the life of the cosmos. By examining humans and trees together, we may understand something deeper about the meaning of the life we are given and its place in the life of the world.” (Rabbi David Seidenberg , from “The Human, the Tree, and the Image of God,” in Trees, Earth, and Torah)”

“In a brief moment in the life of our planet, we have destroyed all but a remnant of Earth’s ancient forests. Over the last 300 years, the majestic ancient forests that once covered our continent have been reduced to a small remnant. The United States has already lost a stunning 96% of its old growth forests. Worldwide, 80% of old growth forests have been destroyed, and every year another 16 million hectares fall to the ax, torch, bulldozer, or chain saw.”