The Secret Doctrine THE SYNTHESIS OF SCIENCE, RELIGION, AND PHILOSOPHY  by H. P. Blavatsky, a woman in the 1800’s who channeled the mahatmas. 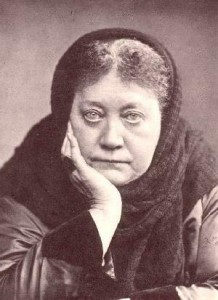 Many spiritualists and wisdom experts followed her lead.

Also among those influenced by her are W. B. Yeats, the Irish poet, and “AE” (George W. Russell). She was influential in the development of many disciplines.

You can download her two volumes for free at:

She  outlined a scheme of evolution relating to the universe (cosmogenesis) and humankind (anthropogenesis), and is based on three premises: (1) Ultimate Reality, as an omnipresent, transcendent principle beyond the reach of thought; (2) the universality law of cycles throughout nature; and (3) the identity of all souls with the Universal Oversoul and their journey through many degrees of intelligence by means if reincarnation, in accordance with “Cyclic and Karmic law.”

The Secret Doctrine is claimed to have been largely based on the archaic manuscript of The Book of Dyzan, which HPB interpreted. She claimed the Mahatmas communicated parts of The Secret Doctrine to her, claiming they impressed thoughts in her mind which she put to paper. Critics say she copied her thoughts from various existing works.

During 1889 HPB finished two more books: The Key to Theosophy an introduction to theosophical thought and philosophy; and, The Voice of the Silence, a mystical and poetic work on the path of enlightenment.