(Part one, the photo journey, is on my Monday Morning InterPlay blog.)

The Parliament of World Religions was life altar-ing for me. I came home more grounded as a woman, a leader, and activist for peace and health on our planet.

Indeed, every InterPlayer at the Parliament of World Religions made a big journey.

With my own small eyes I saw…

How Soyinka BIBOfied the parliament, Breathe In Breathe Out with a sigh, hum, yum or roar!

How Betsey Beckman wept in Soyinka’s arms when Uncle told us it is too late for the ice.

How Masankho Bands sang the names of the countries of the world off the top of head in our performance.

How I held hands with Susanna Pain at the inaugural Women’s Assembly, recalling her being a first InterPlayer in Australia and an Anglican Priest in the first group of women in Sydney refused ordination.

How Barbra Wiener and I sat together with hundreds of others at the Langar, the daily Sikh free lunch fed so graciously to thousands of us, a practice shared for over 500 years.

How a man who carries the world peace violin heard Linda Clare Breitag warming up on her fiddle and invited InterPlayers to dance and bless it as she played.

How great was Cassandra Sagan’s joy when the deans of the Jewish Ordination Program witnessed our performance and exclaimed their desire to include InterPlay in their programming.

How much laughter happened as we raucously improvised Motown hits in the backyard party of Kelsey Blackwell’s best friend.

How Rehana Tejpar, Agnotti Cowie, and Kelsey Blackwell, InterPlay leaders in their thirties, danced full out side-by-side as strong women ignited by passion and love.

How Susan Pudelek, Parliament Ambassador, presented her reflections not only about the Buddhist Catholic dialogues in Rome but also shared her consternation about the absence of female leadership on the opening night of the Parliament, calling it unacceptable.

How Judy Shook shone as a liaison for Creation Spirituality at the Cosmic Mass and took the hand of the Holy Man who ordained us.

How Bobbie Bolden, the consummate artist and InterPlay elder led a gesture choir on the struggle of women to raise families and also work.

How Michelle Jordan vocally and spiritually lifted us with her vocals to the heights of love and power, so that heaven sang under our wings and we only had to open them and fly.

How we fell alongside each other in a Silent Women’s Walk for Peace in the manner of Thich Nhat Han. There we were: Sangha leader AJ Johnston, Brazilian wisdom leader and therapist Nadia Thalji, Chaplain Diane Christopherson, Dharma teacher Kaira Jewel Lingo, and row upon row of others, all walking in silence to the indigenous fire after the morning plenary on Women’s Religious Leadership. At the fire, we InterPlayers spontaneously stepped out with shape and stillness as Soyinka played flute, drummed, sang, and others who felt free joined in.

How Sally Mahe, director of the United Religions Initiative both connected world leaders at her booth and then shone radiantly with purpose and joy during our UBBH performance.

How the daughter of Sharie Bowman, Jocelyn who photographed our journey wept as she spoke of the overwhelming love she felt in the assembly.

How David McCauley and Enver Rahmanov created beauty and space with Carla de Sola in a powerful Interfaith Danced Prayer that made me weep with gratitude for my dance lineage.

Last of all I could talk about Sean Dennison for whom InterPlay is more a medicine than anything.

I first met Sean in my class at Pacific School of Religion. A year later he transitioned. Sean went through the Bay Area InterPlay Life Practice Program, became a Unitarian minister and now serves a church and online as an activist and teacher.

I have a deep love for Sean so it was a miracle and a joy when he and I danced around the indigenous fire at the end of the women’s peace walk.

Sean appeared the morning of the Unbelievable Beauty of Being Human performance. Right before we began he greeted me and placed a green stole in my hands.

When I opened it I saw a tree, a river, and a field of green. These are my spirit guides.

I was overwhelmed. Not knowing what to say I put it on. Maybe receiving this stole is what led me to share with the audience that I had renounced my ordination some years before when I found I could no longer uphold the forms of a religion that keep body and soul apart and spirit and people from rising. 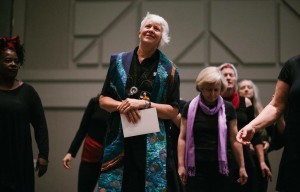 InterPlay has indeed given me a way to faithfully honor people and the earth and to create beauty. That is all I want, “A WAY.”

I thanked Sean after the performance. That is when he told me that the stole was one of two given to him at his ordination as a Unitarian Universalist minister.

He said, “I now give it to you. You don’t need to be ordained. I am sharing my ordination with you.”

Sean ordained me that morning into the power of WE.

Later, Arnold Thomas, Salt Lake City Piute Holy Man ordained 1000s of us as he held up an ear of corn. He commissioned us to Love Mother Earth, put her first in everything and to tell everyone to do this.

“We” is the new medicine. It is the dreaming, practical, open spirited dance in all we all do.

“There is a river flowing now very fast.  It is so great and swift that there are those who will be afraid.  They will try to hold on to the shore.   They will feel they are torn apart and will suffer greatly.

As the Hopi elders say

“Know the river has its destination.  The elders say we must let go of the shore, push off into the middle of the river, keep our eyes open, and our heads above water.   And I say, see who is in there with you and celebrate.  At this time in history, we are to take nothing personally, least of all ourselves. For the moment that we do,  our spiritual growth and journey comes to a halt.

“The time for the lone wolf is over.  Gather yourselves!  Banish the word struggle from your attitude and your vocabulary.  All that we do now must be done in a sacred manner and in celebration.” Hopi elder