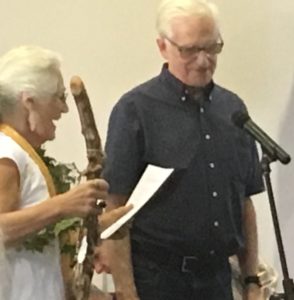 I was fortunate to attend a celebration of Creation Spirituality Community elders and the first people ordained in this stream on Saturday July 30. There were numerous InterPlayful connections including the ordination of Judy Shook, ,a member of our hidden monastery, and and leadership from Gail Ransom and Roxanne Whitelight, Paul Kircher, InterPlayers.

In 2011 Matthew Fox wrote in the Huffington Post about the need to claim the western mystic lineage. I couldn’t agree more.

“Albert Einstein was asked toward the end of his life if he had any regrets. He answered: “I wish I had read more of the mystics earlier in my life.” This is a significant confession, coming as it doe 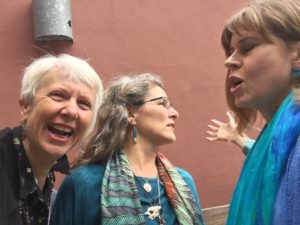 s from one of the greatest geniuses of the 20th century, a man who moved beyond the modern science of Newton and ushered in a postmodern science and consciousness.

In the West, the modern age (meaning the 16th to mid-20th centuries) was not only ignorant of, but actually hostile to, mysticism. As Theodore Roszak has put it, “The Enlightenment held mysticism up for ridicule as the worst offense against science and reason.” Still today, both education and religion are often hostile to mysticism. Fundamentalism by definition is antimystical or distorts mysticism, and much of liberal theology and religion is so academic and left-brained that it numbs and ignores the right brain, which is our mystical brain. Seminaries teach few practices to access our mysticism. This is why many find religion so boring — it lacks the adventure and inner exploration that our souls yearn for. As St. John of the Cross said, “Launch out into the deep.” 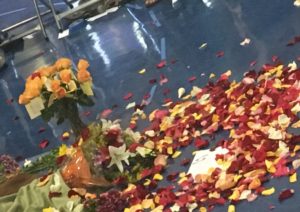 This launching into the depths — into the deep ocean of the unconscious and of the Great Self, which is connected to all things and to the Creator — often gets stymied by Western religious dogma, guilt trips and institutional churchiness. The mystic gets starved. Patriarchal culture by itself is unable to tap into the deep feminine aspects of Divine Wisdom and Compassion and the heart. But the mystics, male and female, do not present a one-sided reality, as Patriarchy does. The yin/yang, female/male dialectic is alive and well in the mystical tradition. God as Mother is honored along with God as Father. Through this, mystics seek wisdom, not mere knowledge.

The West remains so out of touch with its own mystical tradition that many Westerners seeking mysticism still feel they have to go East to find it. While this can work for many brave and generous individuals, it cannot work for the entire culture. Carl Jung warned us that “we westerners cannot be pirates thieving wisdom from foreign shores that it has taken them centuries to develop as if our own culture was an error outlived.”

Is Western culture an “error outlived”? Or is there wisdom deep within our roots that can be accessed anew and that can give us strength and understanding at this critical time when so much is falling apart the world over, when climate change and destruction of the earth accelerates and so many species are disappearing, while our banking systems and economic belief systems, our forms of education and forms of worship, are failing?

I believe that there is great wisdom in our species and in Western spiritual traditions, but that this needs a new birth and a fresh beginning. As a Westerner I must begin where I stand within my own culture and its traditions. This is where the Christian Mystics come in. We in the West must take these insights into our hearts on a regular basis, allow them to play in the heart, and then take them into our work and citizenship and family and community. This is how all healthy and deep awakenings happen; they begin with the heart and flow out from there. 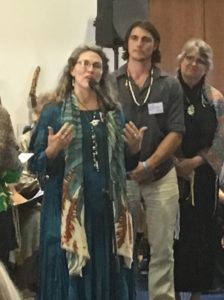 The crises we find ourselves in as a species require that as a species we shake up all our institutions — including our religious ones — and reinvent them. Change is necessary for our survival, and we often turn to the mystics at critical times like this. Jung said: “Only the mystics bring what is creative to religion itself.” Jesus was a mystic shaking up his religion and the Roman empire; Buddha was a mystic who shook up the prevailing Hinduism of his day; Gandhi was a mystic shaking up Hinduism and challenging the British empire; and Martin Luther King Jr. shook up his tradition and America’s segregationist society. The mystics walk their talk and talk (often in memorable poetic phraseology) their walk.

Fr. Bede Griffiths was an English Benedictine monk who spent 50 years in India living and building up an ashram that was Christian and, in many respects, Hindu. He wrote a number of books on the coming together of Eastern and Western mysticism. He writes:

“Perhaps this is the deepest impression left by life in India, the sense of the sacred as something pervading the whole order of nature. Every hill and tree and river is holy, and the simplest human acts of eating and drinking, still more of birth and marriage, have all retained their sacred character. … It is there that the West need to learn form the East the sense of the ‘holy,’ of a transcendent mystery which is immanent in everything and which gives an ultimate meaning to life…”

Thomas Berry was an American priest in the Passionist Order who called himself a “geologian.”  A student of world religions and of contemporary science, he was a great ecological prophet as is clear in his books, The Dream of the Earth and The Great Work, where he warns of the work we must do to reinvent our educational, economic, political and religious systems if we are to be a sustainable species on this endangered planet.  He writes:

“The human venture depends absolutely on this quality of awe and reverence and joy in the Earth and all that lives and grows upon the Earth. … In the end the universe can only be explained in terms of celebration. It is all an exuberant expression of existence itself … A way is 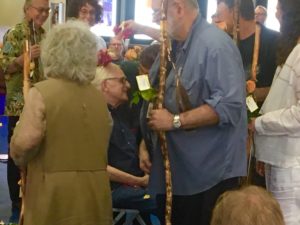 opening for each person to receive the total spiritual heritage of the human community as well as the total spiritual heritage of the universe. Within this context the religious antagonisms of the past can be overcome, the particular traditions can be vitalized, and the feeling of presence to a sacred universe can appear once more to dynamize and sustain human affairs.”

Deep down, each one of us is a mystic. When we tap into that energy we become alive again and we give birth. From the creativity that we release is born the prophetic vision and work that we all aspire to realize as our gift to the world. We want to serve in whatever capacity we can. Getting in touch with the mystic inside is the beginning of our deep service.

Matthew Fox is the author of 28 books including ‘Original Blessing,’ ‘The Reinvention of Work,’ ‘The Hidden Spirituality of Men‘, and most recently ‘Christian Mystics,’ of which this post is an excerpt. Visit Matthew Fox online.