Carolyn North, a close friend and fellow improvisor has astute wisdom and life experience. She sees improv as a remedy for the school of hard knocks and politically tumultuous times. Leave it to mystics and artists! 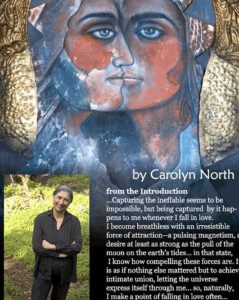 Growing up, I always went to bed at night with my heart in my mouth, uncertain what the next morning would bring. If my mother and sister woke up fighting, which they did on most days, I knew my mind would go blank in school, my fingers too numb to even hold a pencil. On those rare mornings when they didn’t scream at each other, my whole body would feel weird until I found my own center again, and then I could be present for that day.

Needless to say, I all but flunked out of elementary school.

I’ve been experiencing flashbacks of those feelings these days, often too scared to check the day’s headlines for fear I’ll be reduced again to blanking out. I often wonder how I’ve managed to live a productive life despite those years of trauma, and I suspect the reason is that I learned to compensate by creating an improvisatory alternative life in my imagination.

My school of relatively hard knocks may not be the recommended way to become an improviser, but for me that’s the way it worked. My curriculum was based upon an acceptance of uncertainty and the willingness to always start from scratch, being inventive to the max while kids from stable families were more likely to follow the rules. I see my training as preparation for the school we’re all in now where the first motto is, “Expect the unexpected,” and the second motto is, “We don’t know anything so we’d better be prepared for everything.”

It’s ‘The Improv School,’ and our school colors are black and white and brown and tan with all colors of hair and ornaments you can imagine, and our songs are based on an infinitude of modes and scales, and our languages cover the spectrum of sound. The rules of the mingled tribes are changing every single day, and we’ve got a steep learning curve to pick up one another’s languages, learn each others’ moves, and find our way to loving even when we’re scared out of our wits.

You may not believe this, but you and I in our pink pussy hats are running neck and neck with those in “power” because they are scared too, like little kids out of control who count on the grown-ups to stop them from hurting themselves.

They are the barking dogs who can be fierce as long as they know you’ve got your hand on the leash! It’s actually we who have the innovative ideas and sense of fun who are leading the pack! The others are still hauling out old, worn-out strategies of fear-mongering, threatening everything under the sun to scare us, while we are savvy in new ways, sharp as tacks with chutzpah to burn.

For example, whose idea was a border wall? China did that centuries ago and even then it didn’t work; now it’s a tourist trap with souvenir stalls. Even then, every warrior on a pony knew that if they couldn’t go over it and couldn’t go under it, they could always go around it – and they did!

Yesterday, I attended the SONG FOR ALL BEINGS with my friends Arisika and Osha, which was an extravaganza of music and ritual from all over the globe, celebrating life and courage in hard times through song and chant and dance and spoken word, most of it improvisations based upon the sung theme of a Buddhist prayer:

For several hours that simple chant was background to a brilliant theatrical tapestry by artists of every color from Asia, Africa, Europe, the Americas who drifted on and off the stage, mixing it up in many languages while improvising upon each culture’s songs. We sang the chant along with them, dreaming of a world in which all our geniuses would be seen and heard, all borders open for cross fertilization and love affairs, all beauty intermingled.

If enough of us could wish for this, and practice it with everything we’ve got, celebrating one another’s gifts and not worrying about competing for the damned Gold Medal, then it’s simply a matter of time and hard work before things shift over into shared celebration of exceptional beauty.

Last night I dreamed I was sitting in the shallow surf making little doo-dads out of white seashells when a rogue wave roared up and broke thunderously over me. I scrambled breathlessly for the beach but then a sea monster rose up from the water like a dinosaur with massive tentacles and a huge funnel nose and came for me. But the monster was so ludicrously over-the-top, like a crazy drawing in a children’s storybook, that I started to laugh and it deflated like a rubber toy and sank unceremoniously back into the waves.

I woke up bemused.

Yesterday, I received a message from my nephew Charles, one of those newbies-with-vision I keep talking about. On it was a quote by Cynthia Occelli:

“For a seed to achieve its greatest expression, it must come completely undone. The shell cracks, its insides come out and everything changes. To someone who doesn’t understand growth, it would look like complete destruction.”

We are learning that, politically and socially, although our elected administration is already making an unholy mess of things, it is actually the destruction of a worn-out phase, and good riddance. We’ve got the very man and his hench-folks to help it happen with everything they’ve got, massive tentacles and huge funnel noses intact.

It’s not pretty, and we’re already getting shaken up, but they will deflate when they are poked hard enough, so it’s time for us to get with the program, expect the unexpected, use the conditions we’re given whether we like them or not, and listen for the new riff coming out of the cacophony of noise.

And then improvise a new and original song from all those voices.

THE LIVING EDGE OF DYING is the title of Carolyn’s new book. It comprises the 75 pieces written in the past 2 years, covering the era between her husband Herb’s death and the election of Trump. She’s taking the positive path here, charting the golden thread in the chaos of our times. She is offering the book in the spirit of the gifting economy, asking for donations for the costs of production and printing, and asking people to gift it forward to friends. It’s my contribution to keeping us stalwart as things get harder, helping us laugh and cry, and working together to shift this comedy into a higher gear! You are invited to write and order copies.  Send cash or checks to me at: 2447 Prince St. Berkeley, CA 94705