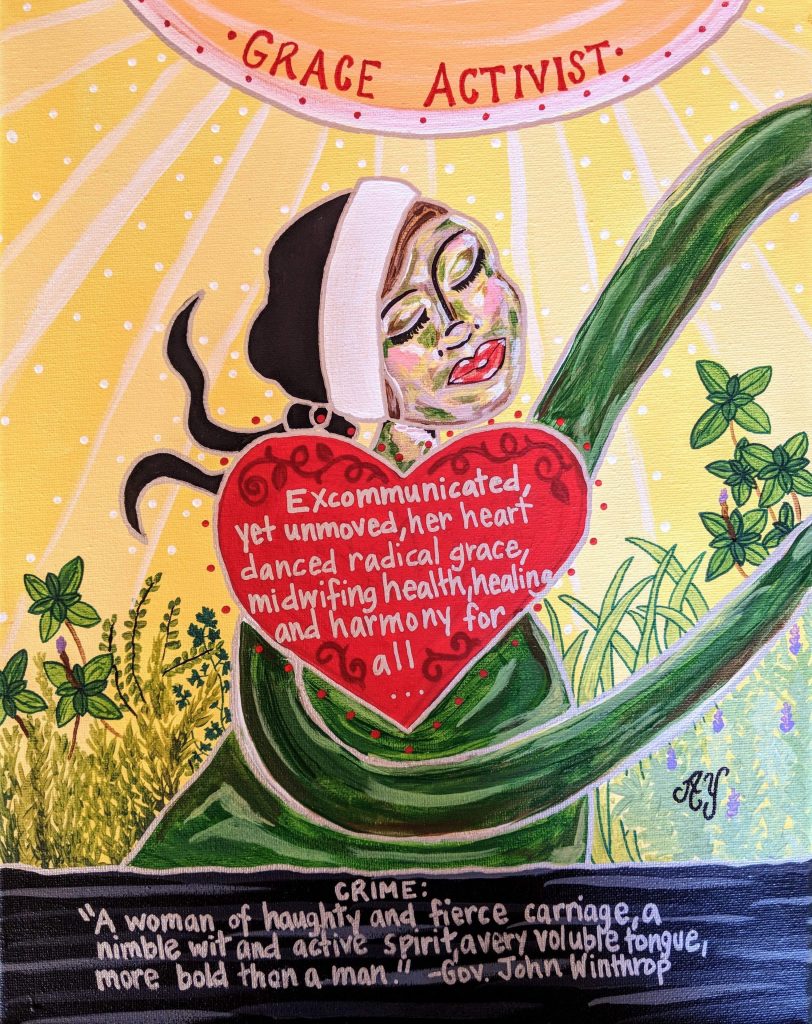 The Hidden Monastery first emerged in 2008 as a sanctuary offering spiritual support for mystics, artists, and activists. I believe that there is an oft-hidden stream of grace and love that is fed by those who are sensitive, gifted, and awake to the lineage of divine reality. Whether or not we are seen or approved of we call attention to the sacred source of life.

This hidden monastery is dedicated to feeding the mystic stream. There are free dance chapels, affordable one to one support, inspiration, letters and wisdom sharing, retreats, and online groups. I am excited about the ensoulment initiation tools offered in monthly small groups.

For my birthday May 28th on Memorial Day weekend, I’m hosting a Hidden Monastery Shrines show at InterPlayce. It will feature the Holy Woman Icon of Anne Hutchinson commissioned from Dr. Angela Yarber who researches, writes and paints remarkable dancers, activists, mothers, and women. She gives the commissioned painting to the recipient and places the icon in a canon of holy women in an online gallery and store.

On this memorial day, I invite you to consider a holy woman in your life to lift up.  Send her name and at my shrine show on Monday, I will attach their name to the shrine I’m creating for Anne Hutchinson. Put it in the comments.

I also invite you to contribute to the Hidden Monastery to honor Anne as well as my birthday. I see this ministry continuing to blossom. If you would like to pour some water on the garden I welcome it. Paypal link here.

We share a common grandmother, Susanne Marbury. My great grandfather was part of the controversial protest against the work ethic “Puritans.” As proponents of grace, our extended family fought non-violently against the land-grabbing, genocidal, judgmental, class and gender biases of men in power.

Anne is a spiritual midwife of American Democracy, the one we still labor to birth. Like Mary Magdalene, the male Puritan leaders of her time demonized her and turned her into a harlot of her faith. Her crime was speaking while being female as a lead advocate and theologian promoting a free grace vs. working to prove one’s worth to deserve God’s love.

Anne was a happily married mother of 12 and a close friend of Mary Dyer, a Quaker. Both were midwives and herbalists. They knew the body. In the early 1600s these well-read teachers saw women as wise and connected to the Divine. Anne spoke out against the male clergy and the Governor, was put on trial, kept under house arrest, excommunicated, and with others banished from Massachusettes. These “Antinomian” rebels had their guns removed.  Antinomianism relates to the view that Christians are released by grace from the obligation of observing the moral law. This movement included 60 young men who signed a protest and boycotted the leaders of the war on the Pequot Indians. In a later season, Anne and William Hutchinson helped create the document to separate church and state.

About Angela: Angela holds a Ph.D. in Art and Religion and is the author of books that address the intersections among gender/sexuality, religion/spirituality, and the arts. An ordained, queer clergywoman, she served local churches and taught graduate and undergraduate students since 2006. After a decade as a professional dancer, she now finds creative fulfillment and spiritual expression by fusing painting, writing, and embodiment through the Holy Women Icons Project. Her partner in life and in this project is Dr. Elizabeth Lee who holds a Ph.D. in Ethics and Social Theory and is a certified Health Coach who has taught ethics, philosophy, and religion.