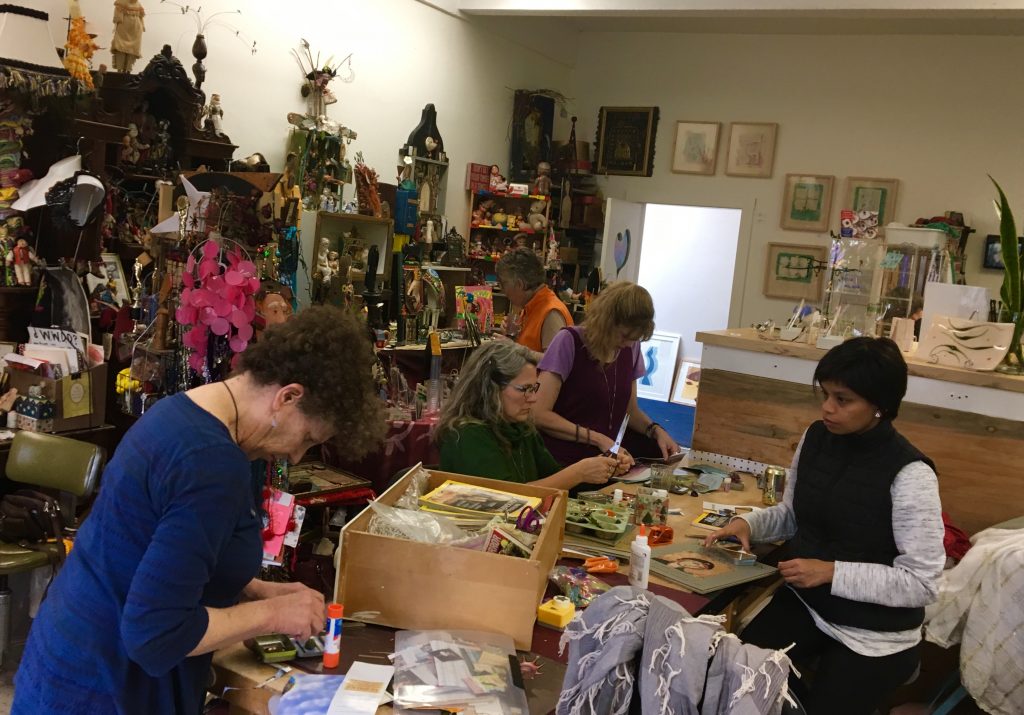 I studied theology and the arts in grad school.  I love ritual play, humor, theater, shrines and altars.

In my forties I assembled my first complex “shrine” to honor fairies. In 2012 I was unexpectedly invited to co-rent a tiny studio. It was part of an art coop in Alameda called Redux. A social enterprise of St Vincent de Paul Thrift Stores it offered a back room river of cast-off treasures. I began to upcycle these materials into art that got displayed in the front gallery.

It crossed my mind when I was young that I could be a visual artist. I decided to focus on dance and performance while I could and turn to my visual art later.

In my fifties my visual imagination exploded. The joy! To think through symbol, image, line, and color! To think in the space of a box! I’m decadently enamored with visual life.

When Redux closed I moved to Jingletown Art Studios.  I curate a long wall of whimsical containers designed to uplift ordinary and sacred images. I gleefully open my studio on Second Fridays. One warning. I enshrine people, too!

Is there is someone or something you want to enshrine? Consider making a date at the Shrine Workshop. I sell, receive commissions and welcome donations. I also loan my shrines. See more about my work at the online Hidden Monastery, cynthiawinton-henry.com, on Facebook at Cynthia’s Jingletown Shrine Workshop or at InterPlay.org.